Einstein on the Only Productivity Tip You’ll Ever Need to Know.

In 1902, a young, depressed and solemn, 21-year-old, Albert Einstein, was on the verge of giving up on his dream of becoming a physicist.

Six years prior, Einstein had enrolled in a Mathematics and Physics teaching diploma at the Swiss Federal Polytechnic in Zurich, Switzerland: where he frequently skipped classes and spent his spare time wooing girls, whilst playing his violin at ladies luncheons and cocktail parties.

As a result of his devil-may-care attitude, Einstein’s professors cast him aside as a lazy student destined for a mediocre career in Physics.

And after graduating, Einstein couldn’t get a job—in fact, he was passed over a job role as a lab assistant, and even contemplated selling insurance. [1]

After two frustrating years of job hunting, Einstein moved to Bern, the capital of Switzerland, to work as a clerk in the Swiss patent office.

Working six days a week as a patent clerk, Einstein could barely find any time to develop his scientific ideas, and would eventually give up on a career in Physics.

In March 1905, Einstein submitted a paper that challenged the general consensus that light was a wave, and instead proposed that it was a particle.

Two months later in May 1905, Einstein submitted a second paper. This time he challenged widely held beliefs that atoms didn’t exist, and provided proofs of their existence.

But Einstein wasn’t done yet.

In June 1905, Einstein submitted a third paper—the granddaddy of them all.

Einstein proposed the idea that time and space were the same, and formalized his thoughts as the special theory of relativity.

Then, in September 1905, Einstein published a fourth paper as a follow-up to the previous one.

He suggested that mass and energy were equivalent, and derived the most famous equation in the history of mankind: E=MC^2.

In the years to come, these four papers—produced during “Einstein’s Miracle Year”—would radically transform the way humans understand the world.

And by the end of his career, Einstein would publish over 300 scientific papers, receive a Nobel Prize in Physics and firmly establish himself as one of the greatest physicists of all time.

So, here’s a puzzling question:

How is it possible that this failed scientist and unknown 26-year-old clerk destined for a mediocre life, could suddenly produce four groundbreaking papers within the span of a year, that would change the course of history?

And what’s the most important lesson on productivity and success, we can learn from Einstein? 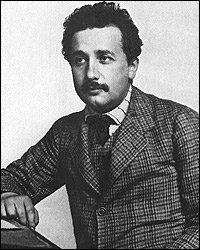 The Cult of Extreme Productivity

“If you’re lonely when you’re alone, you’re in bad company.”

We live in a world that rewards busyness and the idea of ‘getting things done’: an addictive rat race to cross off as many things from your to-do list, as fast as possible.

Because of this viral hype, we bury ourselves in busyness and attempt to achieve much more than we’re capable of.

Each day, we create unrealistic expectations to respond to every single email in our inbox, spend quality time with our family and friends, exercise, read a book, sleep by 10 p.m. and so on.

But, these superhuman attempts to get so much done and the constant bombardment of new productivity tips, hacks and gadgets, leads to procrastination, stress, burnout and disappointment.

And worse of all, the cult of extreme productivity has robbed us off the ability of enjoying our own company.

A study conducted at the University of Virginia, discovered that participants would rather subject themselves to electric shocks, than be left alone with their thoughts. [2]

Likewise in our everyday lives, we distract ourselves with social media, emails, new goals and ideas, to avoid being alone with our thoughts.

The cult of extreme productivity has sold us the lie that boredom should be avoided at all costs, and doing nothing at all is an unproductive strategy for lazy people.

Yet, it is during moments of solitude that we can discover ingenious solutions to familiar problems and gain clarity to make better decisions.

A Time to Do Nothing But Be Alone

In his book, Einstein: His Life and Universe (audiobook), biographer and historian, Walter Isaacson shares Einstein’s thoughts on the need for solitude:

“I am truly a ‘lone traveler’ and have never belonged to my country, my home, my friends, or even my immediate family, with my whole heart; in the face of all these ties, I have never lost a sense of distance and a need for solitude.” [3]

From his youth, Einstein had a habit of spending a lot of time away from his friends, family and work, to do nothing but think.

He would regularly go for long walks, wander off to quiet cabins in the mountains, play his violin, or sail in the seas with his wooden boat to find serenity.

It was during these moments of solitude that Einstein would discover ingenious solutions to difficult problems:

“He would often play his violin in his kitchen late at night, improvising melodies while he pondered complicated problems. Then, suddenly in the middle of playing, he would announce excitedly, I’ve got it!” [4]

In a letter to his friend, he wrote, “How conducive to thinking and working the long sea voyage is—a paradisaical state without correspondence, visits, meetings, and other inventions of the devil!” [5]

If Einstein were alive today, he’d be labelled a loner in need of more social time. But, without his solitude he’d never have achieved an extraordinary level of success in his lifetime.

Likewise, practicing solitude will help us to improve our productivity, creativity and decision-making in everyday life.

For example, I typically take daily walks in a quiet park, travel without my headphones, and spend a few days in the woods once every couple of months.

And I can say without a shadow of doubt, that my breakthrough ideas and clarity on crucial life decisions, have shown up during these moments of solitude.

Simply block out a few minutes each day to be alone and do nothing at all.

By doing so, you’ll tap into your inner genius and uncover the most effective ways to take action.

“Writing, at its best, is a lonely life.”

In our pursuit of ‘getting more things done,’ we’ve lost sight of the true meaning of productivity.

The best way to figure out the right things to focus on and the best ways to tackle them, is to spend more time alone with your thoughts and embrace solitude.

And just like Einstein, you’ll achieve much more and unleash your potential.