The Real Reason Why You’re Always Tired and Low On Energy, Even Though You Get Enough Sleep Every Night.

You’ve done everything the experts say you should do: get enough sleep each night, eat healthy meals and exercise on a weekly basis.

But every morning, you wake up exhausted and feel constantly tired throughout the day.

Your lack of energy kills your productivity at work, damages your relationships at home, and holds you back from living at your full potential.

So how do you combat this? You drink more caffeine and sleep longer hours. But nothing seems to give you enough energy to get important things done.

Why are we always tired, despite living a relatively healthy lifestyle? And how can we have high energy levels throughout the day?

To solve this puzzle, we’ll take a short detour into the world of prisoners and the court of law.

In 2011, a group of researchers conducted a study of 1,112 judicial rulings over a 10-month period, to discover whether judges made their decisions solely based on facts or emotions. [1]

As we’d expect, the judges based their decisions on laws and gave equal and fair rulings to each prisoner.

Instead, the researchers discovered that the likelihood of a judge making a favorable ruling was highest at the beginning of the day (approximately 65%), gradually drops to nearly zero with each decision, and spikes back up to approximately 65% after a break for a meal. 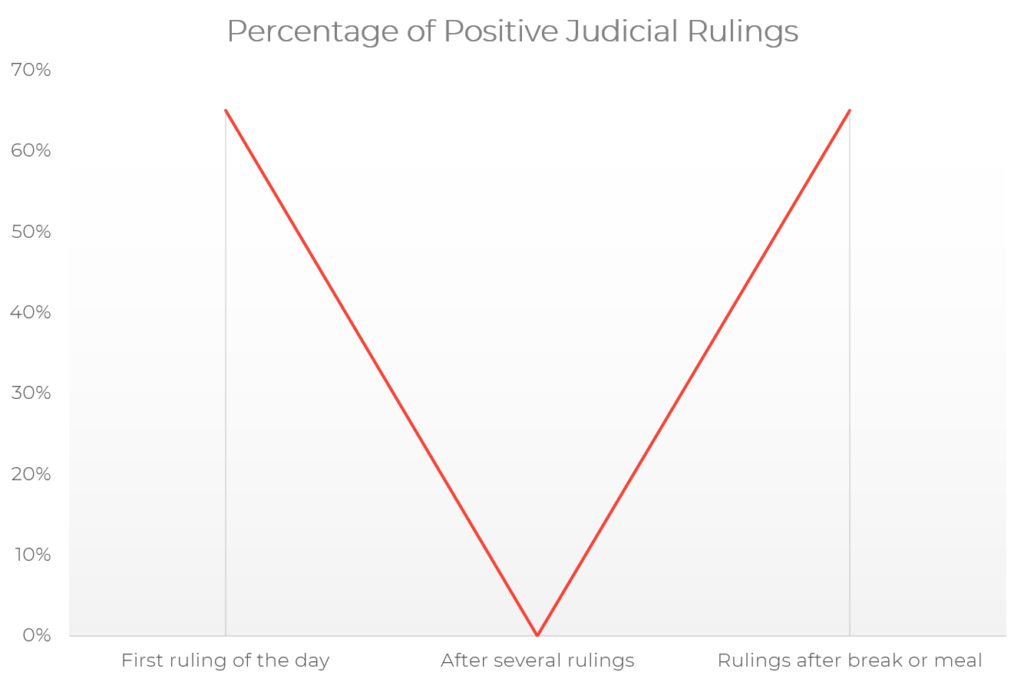 In other words, if you were a prisoner, your best bet was to appear before a judge at the beginning of the session or immediately after a break.

Why did the judges make unfair court rulings?

The reason behind this phenomenon is what psychologists refer to as Decision Fatigue. [2]

In a nutshell, the more decisions we make in any given day, the more mental energy we use up, and the lower the quality of our decision-making.

This is why the judges made less favorable rulings as the day went by. They were mentally exhausted.

So how does this study solve the puzzling question of why we feel tired all the time?

The answer is simple: We make too many decisions on a daily basis.

“Information overload will lead to ‘future shock syndrome’ as an individual will suffer severe physical and mental disturbances.”
– Alvin Toffler

From the first minute we’re awake each morning, our minds are flooded with an overwhelming number of choices to make: What clothes to wear, what food to eat, which tasks to prioritize and so on.

It’s no wonder why we’re exhausted at the end of each day. Our brains are constantly multitasking and working 24/7 without a break.

The best way to protect our brains from decision fatigue and keep energy levels high throughout the day, is to drastically reduce the number of choices we’re faced with on a daily basis.

The less decisions we make, the better our decision-making and the more energy we’ll have to focus on what truly matters to us.

1. Danziger et al (2011). Extraneous Factors in Judicial Decisions. Proceedings of the National Academy of Sciences of the United States of America.