On March 27, 1973, the 45th Academy Awards was hosted to honour the best films of 1972. One of these films—The Godfather—was nominated for eleven awards, including the best actor award for Marlon Brando’s performance as the character ‘Vito Corleone.’

During the ceremony, the event hosts stepped unto the stage to announce the winner of the best actor award. After calling out the names of the nominees, the auditorium went silent as the hosts opened an envelope containing the name of the winner. “The winner is…

“….Marlon Brando, in The Godfather.”

A loud applause from the audience quickly followed the announcement. There was a unanimous appreciation of what is still considered today as one of the greatest films and actor performances in world cinema history.

This was a dream come true for a man like Brando, who had dedicated so much of his time and energy into his craft of acting. To be widely recognised, rewarded and appreciated for hard-work is a privilege that very few people achieve.

And yet, Brando didn’t care much about what other people thought about him. In fact, on this evening, Marlon Brando would figuratively “hold two fingers up” to the film industry and shock the world.

Shortly after the announcement, a petite young lady wearing an Apache dress with long black hair, stood up and climbed up on stage—evidently, this wasn’t Marlon Brando.

One of the hosts in a state of shock, extended the award statue to the apache lady, who waved it away and proceeded to give a speech from the podium. She said:

“Hello my name is Sacheen Littlefeather, I’m Apache…..I’m representing Marlon Brando this evening and he has asked me to tell you … that he very regretfully cannot accept this very generous award. And the reasons for this being are the treatment of American Indians today by the film industry —” [1]

Shortly after this statement, disgruntled noises and shouts of “boos” came from the audience in disapproval of these comments.

But, Brando didn’t care about seeking approval from his peers in the film industry. As a matter of fact, he rejected the prestigious award and didn’t bother attending the ceremony as well.

Brando was willing to sacrifice his reputation and career to stand up for what he believed in.

How did this privileged man learn how to stop caring about what other people think? And, how can we learn to stop worrying about the opinions of others? 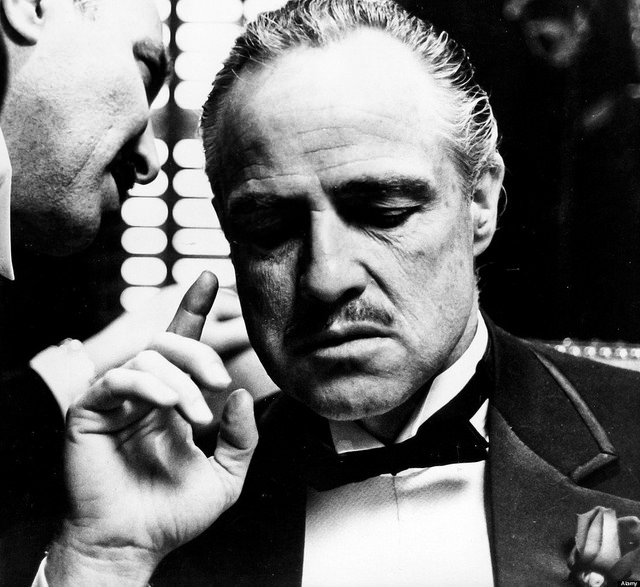 How To Stop Caring About What Other People Think

During an interview on the The Dick Cavett Show in 1973, Brando gave some insights into his reasons for walking away from the approval of his peers:

We were the most rapacious, aggressive, destructive, torturing, monstrous, people who swept from one coast to the other murdering and causing mayhem among the Indians. That isn’t revealed, because we don’t like that image of ourselves.

Indians have been tragically misrepresented in films, and in our history books, in our attitudes, in our reporting…
So we must set about to re-educate ourselves.” [2]

At this point in his career, Brando consistently used his celebrity position to bring attention to Civil rights issues and injustices across the U.S.A.

Specifically, the plight and the injustices against the American Indians’ was a painful issue that Brando had desperately attempted to portray through movies for many years. But, instead of being addressed, Brando felt that his peers within the film industry showed little concern, dismissing his ideas as pointless.

The 1973 Academy Awards turned into Brando’s best opportunity to give those who couldn’t be heard a platform to reach millions of people with their message of pain and sorrow.

Brando’s frustration in dealing with friends and peers who didn’t care about his ideas, coincidentally led to his carefree attitude towards them as well.

The realisation that no one really cared about him was the first shift in his mindset. But, most importantly, Brando developed a belief in something that he cared about much more than the approval of others.

The belief that the injustices of the oppressed minorities should be accurately presented to and addressed by the citizens of U.S.A.

Believe in Something Bigger than Yourself

“Be who you are and say what you feel, because those who mind don’t matter and those who matter don’t mind.”

It’s easy to fall into the trap of people pleasing. Sometimes, we change our behaviours and plans to fit into the agenda of someone else, who may also be a complete stranger.

We let the opinions of others control how we think and live our lives. To avoid criticism we deny others the privilege of learning about who we really are and what we believe in.

Unfortunately, many people die without sharing their work with the world because they cared too much about what other people think.I could have been one of these statistics, but I was lucky to learn what Brando had discovered, early in my life.

1. No one really cares about you.

Nobody cares about your well-being more than you are capable of doing so yourself. People are too busy dealing with their own life problems and issues to worry about yours.

Plus, a major part of human interaction is mutual value exchange. In other words, most people who interact with you on a daily basis only do so because you are valuable to them.

“The poor are shunned even by their neighbours, but the rich have many friends.”
— Proverbs 14:20

Most people are capable of being generous, but we should also acknowledge that human beings are inherently self-centered.

Once you begin to embrace this philosophy, you will be better prepared to take on the next step. That is…

2. Believe in something bigger than yourself

Most conversations about not caring about what other people think, are primarily concerned about how you will feel.

What will people think about me? How do I stop worrying about what others think?

This line of thinking, entirely focused on yourself, doesn’t resolve the root cause of the problem. The problem is that you can’t get rid of caring about what others think because it’s just a part of being a social human being.

Ideally, you don’t want to stop caring about what people think. What you really want is to replace what and who you really care about.

What is important to you in life? What are your values? What do you stand for?

It will reveal exactly why you should stop worrying about the critics and prepare you to deal with haters effectively.

When you believe in something bigger than yourself—a cause, mission, idea—the opinions of others no longer control your life because you care more about your beliefs than the approval of others.

So, let me ask you this:

Who are you and what do you stand for?

Take some time to think about this carefully. And remember,

“A man who stands for nothing will fall for anything.”

1.Video of Sacheen Littlefeather refusing to accept the Best Actor Oscar on behalf of Marlon Brando for his performance in “The Godfather” – the 45th Annual Academy Awards in 1973.
2.Marlon Brando on Dick Cavett’s show addressing the treatment of Native Americans/Indians by Colonialists.
3. Image Credit, CC by NA SA 2.0