Inversion: The Billionaire Thinking Skill You Were Never Taught in School.

“All I want to know is where I’m going to die, so I’ll never go there.”

These are the famous words of Charlie Munger, the business partner of Warren Buffett and Vice Chairman of the multi-billion dollar company, Berkshire Hathaway.

Charlie Munger is an American businessman and investor with a net worth close to 2 billion dollars.

Although Munger credits some of his and Buffett’s success to skill and knowledge, he often mentions that the way they think about solving problems is crucial to their success.

Specifically, Munger suggests that thinking about and planning for the opposite of what you want to happen could give you a competitive advantage in anything you do.

This thinking technique, also known as “inversion,” has been used by great thinkers, scientists, Stoics and innovators throughout history.

It’s a counterintuitive way of thinking that we were never taught in school, yet it is crucial for solving difficult problems in a unique way and making good decisions consistently.

Here’s what you need to know about inversion and how to apply it in your life to solve difficult problems easier, improve your decision-making and innovate better ideas. 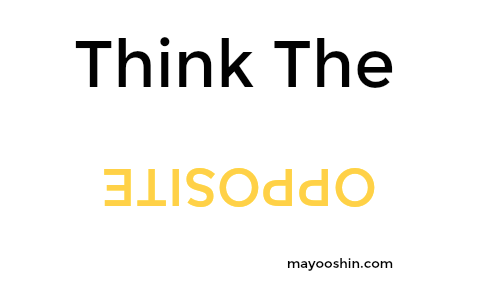 Inversion is a way of thinking about what you want to achieve in reverse.

In other words, instead of only thinking forward about what you need to do to get what you want, you’d flip it in reverse and think backwards about what you don’t want to happen.

For example, when I had just started public speaking and struggled with fear, I focused on avoiding the mistakes of a bad speech, instead of focusing on how to deliver a good speech.

Another example was when I was writing this article. Instead of thinking about what i need to write a good article, I focused on avoiding the mistakes in writing a bad article—over complicated use of language, repetitive words, no practical takeaway etc.

The inversion technique originated from German mathematician, Carl Jacobi, who made significant contributions to different scientific fields throughout his career.

Particularly, Carl Jacobi was well-known for solving difficult problems by using the simple strategy of ‘man muss immer umkehren,’ or in other words, ‘Invert, always invert.’

Carl Jacobi believed that hard problems could be solved easier and quicker by expressing them in the opposite way.

By asking the question of what would happen if the opposite was true, Carl Jacobi innovated solutions to familiar problems which helped him to make unique contributions to his field of work.

The most powerful benefit of using the inversion technique is that it will help you to avoid the bad decisions preventing you from achieving your goals.

“It is remarkable how much long-term advantage people like us have gotten by trying to be consistently not stupid, instead of trying to be very intelligent.”

“Invert, always invert: Turn a situation or problem upside down. Look at it backward. What happens if all our plans go wrong? Where don’t we want to go, and how do you get there? Instead of looking for success, make a list of how to fail instead–through sloth, envy, resentment, self-pity, entitlement, all the mental habits of self-defeat. Avoid these qualities and you will succeed. Tell me where I’m going to die so I don’t go there.”

Combined with forward thinking, backwards or inversion thinking could help you to unlock solutions to difficult problems that may have been holding you back for years.

“… it is not enough to think problems through forward. You must also think in reverse, much like the rustic who wanted to know where he was going to die so that he’d never go there. Indeed, many problems can’t be solved forward. And that is why the great algebraist, Carl Jacobi, so often said: “invert, always invert.” And why Pythagoras thought in reverse to prove that the square root of two was an irrational number.”

Via Damn Right: Behind the Scenes with Berkshire Hathaway Billionaire Charlie Munger.

Instead of focusing on how to make more money, like most business leaders do, Buffett focuses on how to not lose money:

How to Use Inversion to Solve Difficult Problems.

First, you would think about what you want to happen. Then, simply flip this around into the opposite scenario and brainstorm “opposite solutions” that will help you to achieve what you don’t want to happen.

Afterwards, you would brainstorm  “preventive solutions” to prevent these “opposite solutions” from happening.

Here are three simple examples using the inversion technique to create solutions to every day problems:

What you want to happen : “How can I get new customers?”

The Opposite of what you want to happen (Inversion): “How can I prevent the business from attracting new customers?”

Opposite solutions: reduce the promotion of the business, don’t share the benefits of working with your business, avoid research into understanding what customers really want.

What you want to happen : “How can I lose weight?”

The Opposite of what you want to happen (Inversion): “How can I prevent myself from losing weight.”

Opposite solutions: avoid reducing the daily calories you consume, focus on quick results instead of change in habits, don’t track or measure your diet and exercise routine.

Preventive solutions: make it easier to eat healthy and harder to eat unhealthy by changing your environment, use a daily fitness app to track your meals and a journal to track your workouts, skip a meal to eat less.

What you want to happen : “How can I become a better leader?”

The Opposite of what you want to happen (Inversion): “How can I prevent myself from becoming a better leader?”

Opposite solutions: blame the people you lead for everything that goes wrong and take all the credit when things go right. Make demands from your team that you’re not willing to do. Discourage your team from making contributions.

Preventive solutions: Lead by example. Listen 80 percent of the time and talk the other 20 percent. Reward and recognise your team for their efforts. Encourage new ideas and open criticism.

We have a tendency to look ahead to the future for how we want to achieve our goals—but, this may not always be the most effective way to avoid bad decisions that prevent us from making progress.

Instead of focusing on what you want to happen, you can use the inversion technique to think about what you don’t want to happen and plan to avoid this.

Inversion is a powerful thinking skill that could help you to solve difficult problems easier and make better decisions in a unique, well-balanced and less risky way.

Pick your most important goal and use the “inversion” technique to think about the opposite of what you want to happen. Then, write down different ways you could avoid this failure.

1. Thanks to Shane Parrish from Farnam Street for inspiring some of the ideas in this post.

2. Note that inversion is different from “beginning with the end in mind” i.e. Stephen Covey’s 7 habits. Inversion is focused on thinking about the opposite of what you want to achieve.