The 6 Rules of Email: How to Eliminate Email Anxiety and Take Control of Your Inbox Today (Backed by Science)

In 1971, Raymond Tomlinson, a computer engineer working at a technology company, Bolt, Beranek and Newman, was building applications for the ARPANET—the early forerunner for the modern internet. At the time, it wasn’t possible to send emails and the computer was neither affordable nor available to the masses.

Tomlinson and his colleagues had built a messaging program, Sndmsg, which allowed users of a single computer to send messages to one another one. They were also toying around with the idea of building some sort of mailbox protocol, where engineers working on the ARPANET could communicate with each other.

One day, in a Cambridge, Massachusetts, lab, Tomlinson stood in front of two computer machines that at the time resembled a large typewriter.

In one computer, Tomlinson typed up a message, “TESTING 1 2 3 4,”on the program Sndmsg. He directed this message to the second computer, separating the user name and destination address using the @ sign. A few moments later the first email was sent from one host computer to another.

Nearly five decades and billions of emails later, Tomlinsons’ seemingly innocent email discovery has evolved into a major cause of stress, anxiety and low productivity for millions of people across the globe. Several studies have shown that checking email frequently leads to higher levels of cortisol, a hormone associated with stress. [1]

Multitasking between email and work has also been shown to significantly reduce productivity and work performance by creating “attention residue”—the reduction of cognitive performance from switching your attention. [2]

Multitasking expert, Gloria Mark, a professor of informatics at the University of California, Irvine, highlights these negative effects of email multitasking based on an extensive study into the costs of interrupted work:

“We found about 82 percent of all interrupted work is resumed on the same day. But here’s the bad news — it takes an average of 23 minutes and 15 seconds to get back to the task.” [4]

That’s 23 minutes and 15 seconds lost per interruption! Given we’re interrupted several times at work, we’re losing productive hours each day to email distractions or even months each year.

In a desperate attempt to tame our email inbox, we’ve resorted to several overwhelming strategies including inbox zero, complicated folder organizing systems and software, but these only compound our existing stress and anxiety.

Instead, here are six of the best strategies to help you eliminate email anxiety and take control your inbox today. 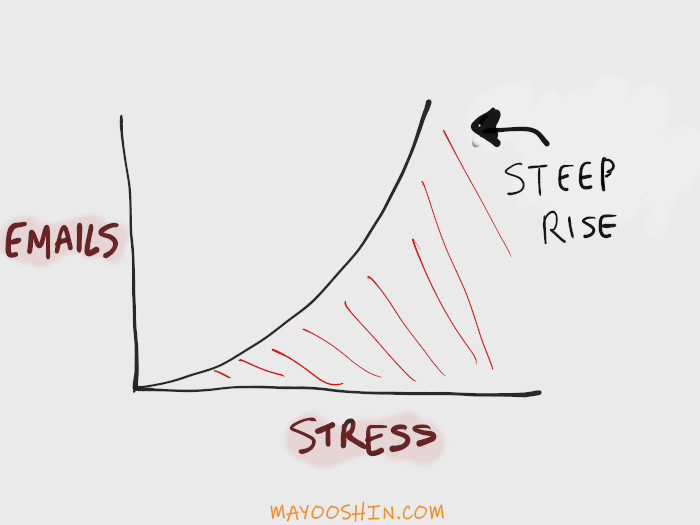 Contrary to popular advice, extensively organizing and sorting your emails using folders could be counterproductive for your productivity and well-being.

In an extensive, large sample size study conducted by Steve Whittaker, an expert in human-computer interaction and researchers at IBM, over 85,000 attempts to sort and find emails were tracked and measured.

During the field study, several hundred office workers used several methods to manage their emails. Some workers used folders to sort their emails, others scrolled through their inbox sorting by senders, or using the search function.

After several months of studying the various workers email strategies and their efficiencies, Whittaker and the research team combined and analysed the data.

They found that clicking through a folder tree took almost a minute, while simply searching took just 17 seconds. In other words, the office workers who relied on a tidy structure of complex folders to retrieve information took longer than those who used the search function of the email provider.

Whittaker provides an explanation to this surprising finding:

Interview data confirms that people file to clean their inboxes to facilitate task management. This result contradicts prior work arguing that people who receive many messages do not have the time to create folders.”

This study doesn’t imply that we can’t use folders to organize our emails by priorities. But, it does highlight our tendencies to use email as a way to feel good and complete tasks that aren’t necessarily important.

The problem with inbox zero is that it feels good in the short-term to empty our email inboxes. In fact, according to Dan Ariely, a behavioral economist who specializes in irrational human behavior, email is a near-perfect random rewards system. [6]

In other words, Inbox Zero is an addictive game, where the scoreboard of your progress is the number of emails left unread and unsorted in your email inbox. The higher the number, the worse you feel and the lower the number, the better you feel.

The compulsion to empty our email inboxes is an addictive habit that makes us feel like we’re making progress and getting things done, but in reality, we’re wasting precious time that could be spent on our most important tasks.

There’s a better approach to managing emails. In the book, Unsubscribe: How to Kill Email Anxiety, Avoid Distractions, and Get Real Work Done, the alternative solution involves the use and understanding of the physics of email.

As a brief review, Newton’s First Law of Motion states that “An object either remains at rest or continues to move at a constant velocity, unless acted upon by an external force.” In addition, Newton’s Third Law of Motion suggests that for every action there will be an equal and opposite reaction.

These laws apply in our use of email in everyday life. Specifically, email sets expectations between the sender and receiver that affects future actions or ‘motion.’

For example, if you regularly respond to a client or colleague within 10 minutes of receiving their emails, they’ll begin to expect that you respond quickly to their emails.

The best way to set stress-free expectations is to politely and publicly communicate your availability to respond to emails with your colleagues, clients and bosses.

Let them know the time periods of the day when you’ll be too busy to check email and those when you’ll be free to do so. The longer you stick to these schedules, the more external parties will adjust their expectations to match yours.

By publicly declaring expectations of your future email interactions, you can create healthy boundaries that allow you to focus on meaningful work, whilst managing your important relationships.

Research conducted by McCormack and his team at the Brief Lab, discovered that approximately 43% of people who received long-winded emails either ignored or deleted them. McCormack explains that when a point isn’t made obvious by email:

“You feel you can’t deal with this right now so you put it aside. A brief email, on the other hand, with a strong subject line that explains the purpose of the email and grabs the reader’s attention is more likely to be read and taken seriously.” [7]

All email responses regardless of subject or recipient will be five sentences or less.

Less is more, even more so via email. Treat all email responses like SMS text messages by keeping each message brief and straight to the point. By doing so, you’ll save more time, prompt quicker and more useful replies and prevent confusion over the intention of your emails.

4. Use the email batching technique

As humans, we have an internal clock that determines our energy levels throughout the day—this is called the circadian rhythm. In essence, there are different periods of the day when we have more energy than other time periods. Typically, our energy levels are highest in the mornings and begin to decline after lunch hours i.e. 2 pm.

The implications of this is straight forward.

To achieve maximum productivity, we should schedule, prioritize and match the most important tasks that demand the majority of our attention with our periods of high energy levels. On the flip side, our least important or less demanding tasks should be matched with the lower periods of energy.

Writing or responding to emails typically falls into the latter category and as such, should be scheduled or “batched” when you’re not in periods of high energy—since this is reserved for your most important task of the day.

Here’s how in three simple steps:

Step 1: Pick three periods during the day—aside from the highest energy periods—when you can set aside 30-60 minutes of your time to focus on emails.

Step 2: Batch your responses to emails during these time periods only.

Step 3: Add an additional fourth period on days when you’ve got an abnormal high volume of emails to respond.

The email batching technique is a powerful strategy that will help you take control of your time, alleviate stress and set proper expectations of your email usage.

According to Daniel Goleman, a psychologist and expert on human behavior, our brains have a ‘negativity bias’ towards email. [8]

If you’ve ever drafted a message or email to someone, which you thought was perfectly fine, but the receiver took offence to your message, you’ve experienced the negative bias effect.

During normal face to face interactions, we have the ability to easily interpret and decode social cues, body language and words for good communication. But, on digital devices like email or text, this ability can be significantly stunted.

As a result, during digital conversations, careful use of emotional intelligence is crucial for clear and efficient communication, especially if you’re a leader or manager who is required to deliver feedback or criticism via email.

Here are some tips on how to use emotional intelligence with email:

By carefully using positive words in your emails, you’ll minimize the effects of the negativity bias, improve the efficiency of your emails and build good will with your clients and colleagues.

Typically, there are reoccurring patterns in the type and timing of emails we receive on a weekly basis. One of the best ways to manage your email, save time and reduce anxiety is to prepare email scripts ahead of time as a guideline to respond to common email queries.

Here are some examples you can use:

If you’re presented with a task or proposal:

Thank you for your message.

I’ll need to spend some time to review this with the team and respond to your proposal.

I’ll revert back to you shortly with the final decision.

If you’re asked for updates on a project you haven’t completed:

Thank you for your email.

We’re currently working on the [NAME OF PROJECT] project, but due to [INCIDENCE], the team has fallen behind schedule.

We’ll make sure to get it to you at most by [Date].

Thank you for your patience.

Please let me know if you have any additional questions.

If you’re asked about your availability for a phone call, meeting or event:

Thank you for your email.

I would be happy to discuss this with you. Are you free for a phone call on either [PROVIDE THREE SEPARATE TIMES AND DATES]?

Let me know which one of these works best for you,

Note: In the example above, we’re providing three separate options because this prevents unnecessary email threads and wasted time spent trying to arrange a time slot that both parties agree on.

Feel free to use and tweak these email scripts, or create yours. By treating email like chess—anticipating and responding to familiar emails—you can save time, reduce stress and get more work done.

Email is Your Servant, Not Your Master

When used properly, email is a useful tool that can save time, improve the speed and ease of communication and improve productivity. But, if it’s role is abused and email is treated as a master, it’s use could lead to addictive habits that reinforce anxiety, stress and unproductive behaviors.

In this modern era of technology, those people who master their emails will thrive and succeed.

The six rules of email are useful guidelines to ensure that you master your email and keep it as your servant.

9. Thanks to 99u for inspiration on idea of email scripts.

10. On a quick note, I didn’t invent the 5 sentence rule. It’s an idea that’s been shared in different variations.