The Iron Mike Rule: The One Thing Successful People Do Differently

By the time he was 13 years old, Michael Gerard Tyson had been arrested 38 times and was sentenced to a Juvenile center in upstate New York.

Tyson was a far cry from the typical profile of a juvenile delinquent: he was pudgy, extremely shy, spoke with a lisp, and was afraid of getting into fights.

In fact, he was regularly beaten up by neighborhood bullies who dubbed him the ‘Little Fairy Boy.’

Like most street kids at the time, Tyson was raised by an alcoholic mother and grew up in Brownsville, Brooklyn, a rough neighborhood that resembled the wild west—imagine movie scenes of people shooting one another, police cars and ambulances ringing deafening sirens whilst speeding down streets, robbers breaking windows, and young kids selling drugs to hookers.

Given that Tyson was a product of his environment, the odds of him escaping a destined life of crime, drug dealing and early death, were slim to none.

But as luck would have it, Tyson’s fate would change when he was brought to the attention of the legendary boxing coach, Cus D’amato.

Cus D’amato was a short, bald-headed, stern faced, Italian boxing trainer, who like Tyson, also grew up in a rough neighborhood in the Bronx, New York.

Tyson would later describe D’amato as a complex and dark figure who didn’t have a “happy muscle in his face.” [1]

On March 1980, Tyson met face to face with D’amato in an old musky boxing gym, filled with weather-beaten newspapers plastered across the walls of a converted meeting hall, located above a police station in Catskill, New York.

After a sparring session in a small ring—during which Tyson was punched in the nose and bled profusely—D’amato invited Tyson to lunch at his white Victorian house.

During the meal, D’amato turned his head towards Tyson and said, “If you listen to me, I can make you the youngest heavyweight champion of all time.”

Tyson flinched at the baffling words of the 70-year-old man he had just met, but committed himself to be under the tutelage and rigorous training regime of D’amato.

As he later noted in an interview, “no one wants to get up and run at 4 in the morning when it’s pitch dark, but it has to be done, and the only reason I do it so early is because I believe the other guy isn’t doing it. And that gives me a little edge.” [2]

In the evenings, Tyson would spend hours watching and studying the fight videos of the best fighters at the time. And by 9.30 p.m. on most days, he went to bed and fell asleep.

For the next several years, Tyson would repeat this tiresome and boring daily routine every single day.

And eventually, his efforts paid off.

By 1982, Tyson had beaten every amateur boxing opponent he faced. And on November 22, 1986, a 20-year-old Mike Tyson, knocked out a 33-year-old Trevor Berbick— in just five minutes and 35 seconds—to become the youngest heavyweight champion in the history of boxing.

D’amato’s prophecy had come true and by the end of his boxing career, “Iron Mike” Tyson was inducted in the boxing hall of fame, recognized as one of the greatest boxers of all time.

When asked to share the secret to his success, Tyson turned to the wisdom of his late trainer and father figure, Cus D’amato, and explained The Iron Mike Rule: 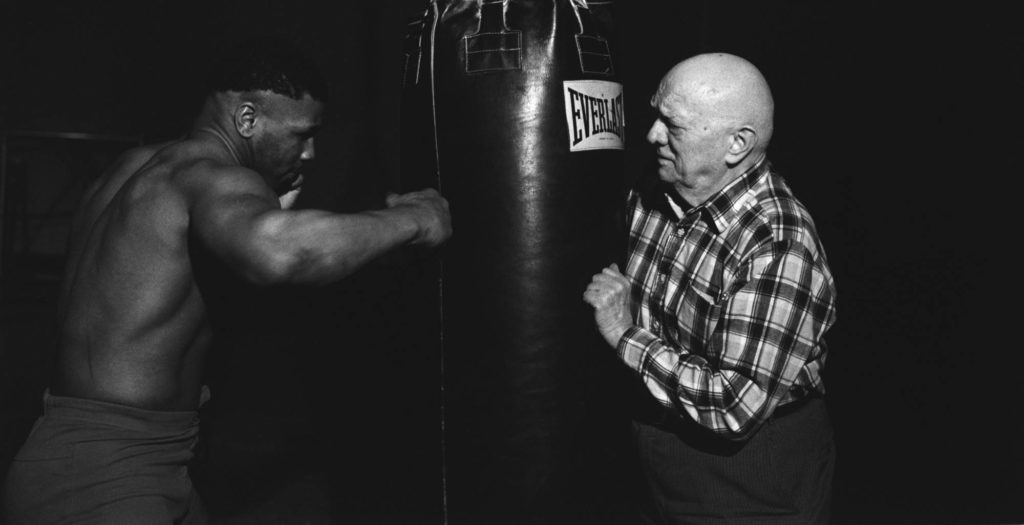 Within a few seconds of logging onto the internet, we’re bombarded with images of people with zero fat, lean perfect bodies, happy and loving relationships, a job that they love every single moment working, a thriving business making millions of dollars in profits and a Lamborghini parked in front of a 20-acre home in The Hamptons overlooking the Atlantic Ocean.

But, is this reality?

The problem is that more so than ever, the results of success are highly visible, glamorized and deceptive.

Just scroll through the images on your social media feeds and it would appear as if everyone else apart from yourself is enjoying success in life.

But in reality, these images are only a highlight reel of people’s best moments. The remaining 99% of their lives are as boring and repetitive as yours.

To add insult to injury, ‘success gurus’ promote their lifestyles, and ‘must-buy’ self help books and products that will teach you the ‘hidden secrets’ of success.

Not only do these glamorized images of success create feelings of insecurity and dissatisfaction with our lives, they also overvalue the results and undervalue the difficulties of achieving success.

And so, when times are tough and you’re falling behind on your goals, it’s much easier to give up than to stay consistent and finish what you start, because of the unrealistic expectations created by these images.

But the irony of this all is that it’s the process behind the scenes—which we’re often blind to and the media hardly promotes—that creates the visible success that we glamorize.

The Unsexy Path to Success

At the time I had zero readers and very little experience building an audience online (in fact, I had catastrophically failed to launch previous online projects).

My plan was simple: every week (till forever), I’d write and publish a new article.

It didn’t matter how badly written the article was, or what tragedies occurred in my personal life that killed my motivation to write, or how afraid I was of failure and criticism, I was committed to publishing at least one new article each week.

During the first six months of writing, my website was a ghost town. Only a small handful of people—a few friends and family who had pity on me, and maybe a stray cat—read my articles.

And although I enjoyed the process of writing, I found myself spending the bulk of my time doing the things I didn’t enjoy: researching, editing and marketing for up to 25 hours per article.

After the first year of writing, my work finally started to gain a little traction, and was distributed by media publications.

Slowly but surely, more people aside from my friends and family, started to read and share my articles.

Almost one hundred articles and two years later, I am extremely grateful that today over 100,000+ people worldwide read my work each month.

I share my story not to gain bragging rights, or even to label myself a “success,” but to emphasize the power of consistency in achieving our goals.

The path to success isn’t glamorous or sexy. In fact, for the most part, it’s unsexy: boring, repetitive and drawn-out.

The difference between successful people and everyone else, is that they’ve learned to fall in love with the process of consistently doing the unsexy work that others aren’t willing to do.

If you want to be a successful author, learn to fall in love with the lonely process of writing for months and years, the paralysis of researching ideas for your book, and the tedious process of revising, editing and marketing your work after it’s published.

If you want to be a successful entrepreneur, learn to fall in love with the lonely process of working on your business for months and years without profits, the tedious process of hiring and firing, marketing and sales, and pivoting your business.

If you want to get into great shape, learn to fall in love with the tedious process of counting calories, cooking and eating boring meals, exercising 3 to 5 times a week, and going to bed early.

Over the short period of a week or month, the advantage is marginal. But, over a time span of five to 10 years, the gulf between the person who consistently does what others won’t do and the person who doesn’t, is ginormous! 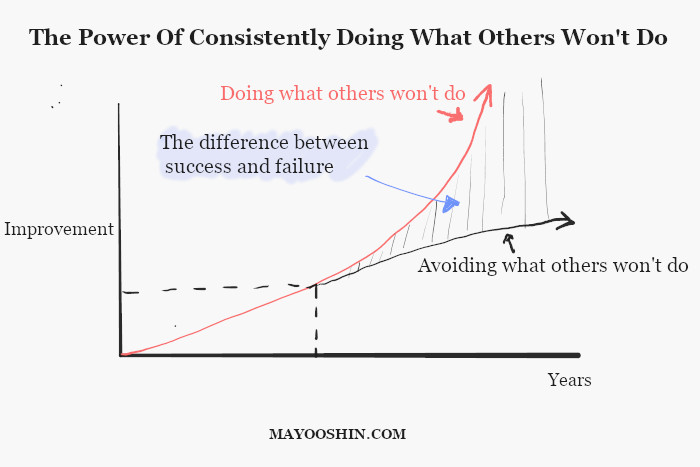 Fall in Love With the Process

“Everyone wants to be successful until they see what it actually takes.”

We’ve all heard the saying that “Rome wasn’t built in a day,” wise words that capture the idea that time is all it takes to achieve great things.

But that’s not the whole story.

Just like how Rome was built through the tedious process of laying one brick at a time for many years, success is built by consistently doing the work that others aren’t willing to do.

The difference between successful people and everyone else, is that they’ve fallen in love with the process of pursuing their goals and the hardship that comes with it—the boredom, drudgery, loneliness, criticisms and failures.

And most importantly they’ve embraced the The Iron Mike Rule which reminds them to: